At the conclusion of their visit to Inistioge the Entente Florale Europe adjudicators met with members of the local EF team to brief them on their initial thoughts on the visit. The following are some of their comments – Overall, they felt they had been very well-informed by the Inistioge team and had learned a lot about the area and its heritage. The effort that has been put in to protect the built environment was also recognised. The judges remarked on the magnificent landscape of the area and its ecology. 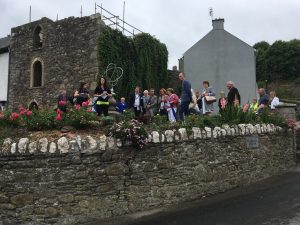 The way in which planting has been done in a pollinator-friendly way was praised as was the way that private gardens and public planting were co-ordinated. The collaboration between the local community and the County Council was commended too. Finally, the judges highlighted how pleased they were with the evidence of how the children of the area had learned from the experience, about sustainability.

A full report of their findings will be published in a few weeks.