Inistioge may have originated as a Viking settlement as it is located at the lowest crossing point of the River Nore and we know that the Osraige defeated Olaf Cuaran, King of Dublin at Inistioge in 964.  The area was granted to Thomas FitzAnthony in 1169 and he established the Augustinian Priory in 1206. The priors developed the settlement but Inistioge declined after the dissolution of the Monasteries in 1540, and in 1566 the Priory lands were granted to Sir Edmond Butler.

Inistioge was incorporated as a town by James 1st in 1608 and weekly markets on a Friday and an annual fair on December 13th were established. In 1649 the town was besieged and captured by the Cromwellians.

Inistioge prospered in the 18th and 19th centuries and its development was intertwined with that of the Woodstock Estate. Woodstock was built by Francis Bindon in the late 1740’s for the Fownes family and although the House is remote from the village, the main approach to Woodstock, the River gate, lower avenue and lodge and the almshouses on the Square all attest to the importance of the Estate in the development of the village. The combination of the steep hill and the earlier medieval walled settlement pattern resulted in a dense concentration of buildings by the end of the 19th Century with a high proportion of fine two and three storey structures. The relative density and elegance of much of this development gives Inistioge an urban quality which is unusual in such a small town and the concentration of public buildings set out informally round a sheltered space away from the River would be more typical of pre-renaissance Italy. The Catholic Church was built in 1836. The Church of Ireland Church incorporates sections of the mediaeval Augustinian abbey, with a belfry and clock donated by William Tighe, the local landlord, in 1876.  With his wife, Lady Louisa, he is more famous for the development of the 19th century Woodstock Gardens and Arboretum now restored and managed by Kilkenny County Council.  Inistioge is identified as a National Monument due to its rich archaeological heritage and is protected under Section 12 of the National Monuments (Amendment) Act,1994.

The vestibule of the Church of Ireland was part of the original Priory and fragments from the cloister have been incorporated into the north and east walls of the Catholic Church. The “Black Castle” in the churchyard behind the Church of Ireland was also part of the Augustinian Priory and is now the Tighe (Woodstock Estate) family mausoleum. The motte of Thomas FitzAnthony’s first fortification is located behind the houses halfway up the hill from the Square and survives to a height of 10 metres and 12 metres wide at the top. The ruin of a three-storey fortified town house can be seen on the west side of the Square. Between the Square and the river is another two-storey medieval structure.  The upper level is a later re-modelling on the original base and we know this building was used as a courthouse during part of its history. St. Columbkille’s Holy Well, tucked away in the north-east of the village has an elaborate entranceway incorporating a number of 16th Century carved stone panels which were probably salvaged from the Priory. There is a mention of a town wall in the 1608 charter but knowledge of the line of the wall over most of its length has been lost. However, there appear to be remains incorporated into the boundary walls of the houses running south from the fortified house on the Square. 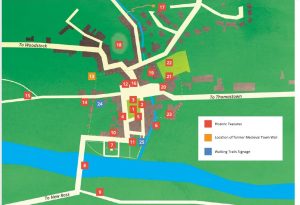 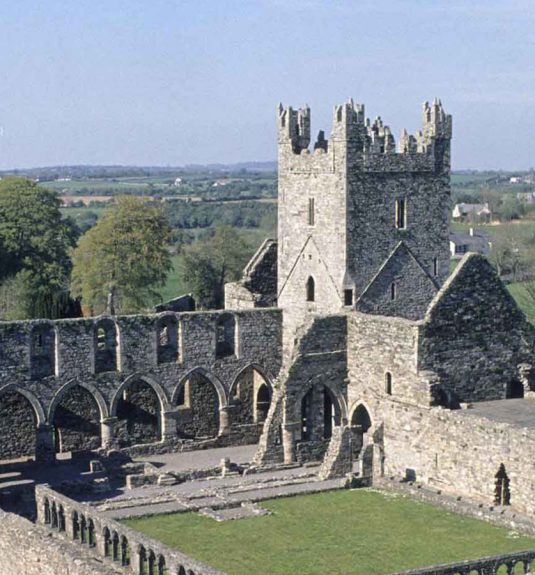