Kilkenny County Council recently secured grant aid, under the Outdoor Recreation Infrastructure Scheme (ORIS), for the rehabilitation of existing tracks and trails in Woodstock. During the various phases in the work, there will be some short term disruption to individual tracks and trails which will impede some regular walkers. Work on identifying and repairing old drains will be part of the works and there will be machinery on site. The necessary signage and notices will be displayed, and Kilkenny County Council asks people to observe the temporary restrictions. It is necessary to inspect the drains during wet weather, to establish the extent of the remedial works. So the initial works will be inspection and identification, followed by repair to drains and watercourses. 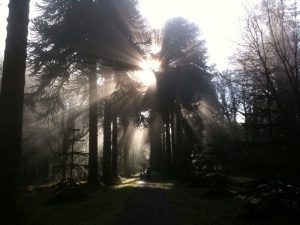 The overall objective of the project is to encourage engagement in outdoor recreational activity. This development will facilitate the long-desired provision of an all-season amenity trail which will reinforce the link between the village and the demesne and allow visitors to explore one of the most scenic heritage sites in County Kilkenny linking the village and up-grading existing paths and trails/tracks throughout the estate with recently enhanced way-finding and interpretation. The proposed works involve the linking of Inistioge village to the Woodstock estate and gardens by means of the existing path network along the River Nore, and through the Woodstock Estate. The paths are very popular with local people but are in poor condition and, as a result, have not been actively promoted as an amenity/tourism resource to date. The main problem is the old drainage network laid down in the Victorian era when the estate was developed has over the years become blocked and diverted causing damage to surfaces and walls. The proposed works will involve identifying and locating the original drainage network from old Ordnance Survey maps; clearing blockages and re-opening shores and channels, many of which are still in-situ. It is also proposed to erect a canvas image of Woodstock House to the front elevation of the house now in ruins. The facade will show visitors what the House looked like in its heyday, and will not interfere with the structure, as it will be constructed as a separate entity. The image will be in black and white and will be erected in sympathy with the formal Winter Gardens, currently being restored, to the rear of Woodstock House.

The paths will also require repair as the surface is poor in many places. This will involve spreading and compacting a layer of stone filling on the surface to create a high quality 6 kilometre surface for walking with a material which is in keeping with the rural surroundings. The proposal will ensure that recently sign-posted walks from the Inistioge village through the Woodstock Estate to the gardens and the return loops are walkable all year round. The connectivity to the South Leinster Way is also highlighted and signed, together with Map boards highlighting the many heritage features in the immediate area and also the tourism features in the wider Inistioge/Thomastown/New Ross/Graiguenamanagh and the links to same by existing river walks (The Nore Valley Walk) and the South Leinster Way (Links to Graiguenamanagh).